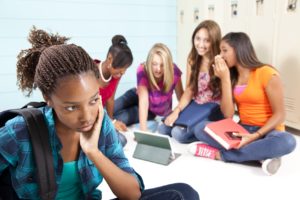 In today’s digitally connected and social media obsessed world, bullying is more pervasive than ever before. Many of us live with it every single day as do our children and teens.

We live in a follower-leader society, a pack animal society. When we look at bullying as a dynamic, a bully is a leader although an unhealthy one. So we want to use that energy, channel them into being more healthy leaders. We have to put some pressure on them to convert.

In most every bullying situation there are four key players: the bully, the target, bystanders and “upstanders”. Bystanders are those who witness the bullying, but choose to do nothing to help the person who is targeted. They are actually part of the problem, part of what enables the bully.

Upstanders are also witnesses to the bullying however they choose to take some action to help the targeted person. An upstander is anyone who stands up for someone who is the target of bullying. They speak up and say that’s not nice, that’s really mean, or intimidating, or harassing, or humiliating.

If you are a bystander because you are afraid of retaliation there are things you can do to become an upstander:

What You Can Do About Bullies

Get people on your side. There is strength in numbers. It’s hard, but I encourage people who are being bullied to talk to teachers, counselors, or co-workers.

Remember isolation and silence is your enemy. Talk to people until you find someone who will support you.

And if you find out they are not an upstander or refuse to become an upstander, then keep going, keep looking, keep it in motion. Do not isolate yourself; don’t be silent.

The person who is targeted needs to speak up, tell someone and ask for support. Those witnessing the bullying need to speak up either publically or privately – tell the bully to stop or tell an authority figure, but find your voice.

Carolyn King, MD, is a psychiatrist at the Pine Rest Christian Mental Health Services in-patient hospital. She works with children, adolescents and adults.