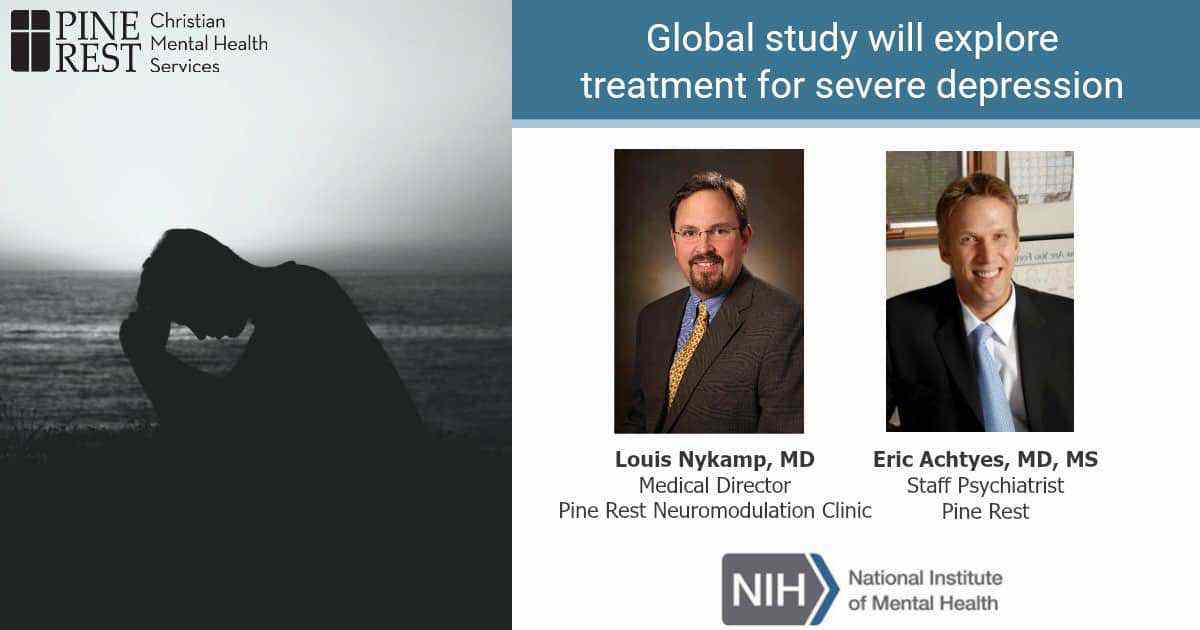 Pine Rest Christian Mental Health Services is participating in a National Institute of Mental Health (NIMH) study related to major depressive disorder (MDD). The study convenes investigators from around the world to carry out a genetic study of MDD treated with electroconvulsive therapy (ECT).

NIMH awarded more than $5 million to fund the Genetics of ECT study – or GenECT – over a five-year period. The National Network of Depression Centers (NNDC), along with seven allied ECT centers in the U.S., has joined forces with the Psychiatric Genomics Consortium to conduct this study on a global scale. Pine Rest and Michigan State University are participating through their joint associate membership in the NNDC.

“The sheer scale of the study, the cooperation of the NNDC sites, the additional international collaboration, and the focus on severe depression in the setting of ECT sets this study apart and makes it very exciting for Pine Rest to be involved,” says Louis Nykamp, M.D., Medical Director, Pine Rest Neuromodulation Clinic – ECT/TMS.

This study aims to collect genetic samples from 15,000 patients receiving ECT for severe depression across ECT centers in the U.S., plus an additional 10,000 patients from ECT centers around the world. The driving goal of the study are to identify genetic variation that 1) contributes to risk for severe MDD and indicates which patients may be good candidates for ECT, and 2) influences response to ECT and predict which patients may benefit from treatment.

“This is a landmark study,” said Peter Zandi, Ph.D., co-principal investigator, Johns Hopkins Bloomberg School of Public Health, “representing not only the largest study of ECT ever conducted, but one with potential to greatly improve how we understand cases of depression that are difficult to treat traditionally.”

The hope is that comparing genetic profiles of patients who receive ECT with how well the treatment works for each patient will shed some much-needed light on how ECT works, who it works for, and how to identify the best candidates for ECT treatment.

The study has begun enrolling patients who will give a blood sample for genetic testing. Patients will answer some depression questionnaires with nursing staff before, during and after treatments, which is already done as part of current patient care.

“Many studies are limited by small sample sizes, but with genetic studies large sample sizes allow for better detection of trends or correlations,” says Eric Achtyes, M.D., M.S., Pine Rest’s principal investigator for the study. “Research like this, with many partners in a global network, allows the aggregation of data in a way individual institutions could not accomplish on their own.”

Pine Rest is an associate National Network of Depression Centers member partnered with Michigan State University College of Human Medicine. The NNDC was established to mobilize collaborative expertise to counteract the public health crisis of depression, bipolar illnesses, and other mood disorders. The NNDC is a nonprofit network of academic medical centers dedicated to improving the lives of those affected by depression and related mood disorders by changing the national conversation surrounding these illnesses through large-scale collaborative studies, education, and outreach. The NNDC has 21 members and four associate members.