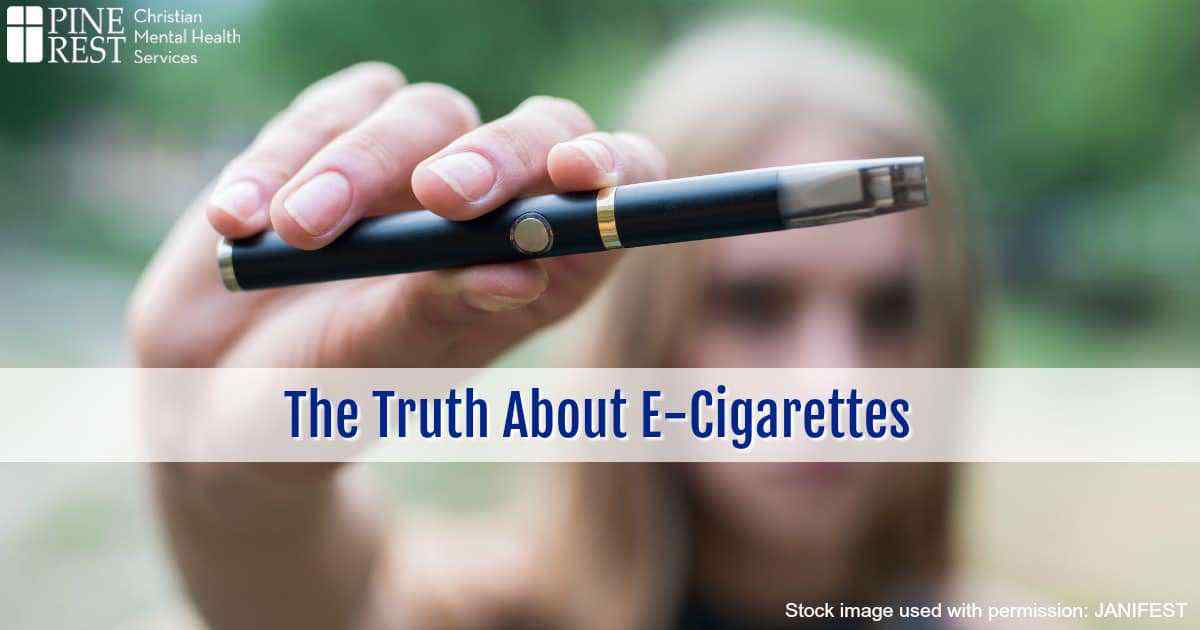 The vaping industry has run a very successful campaign to create a widespread perception that e-cigarettes or vaping is less dangerous to users than smoking conventional cigarettes. But are they really? The information available can be confusing. For every story or article proclaiming the benefits of e-cigarettes, an equal number of articles raise concerns about vaping risks, especially for teens and young adults.

Looking at the facts, I believe our youth and young adults are at risk for negative health effects from e-cigarettes. Let me explain by going into some details you might not be aware of.

What are E-cigarettes? What is ‘Vaping’?

A Chinese pharmacist, Hon Lik, created the first commercially successful electronic cigarette in 2003. He was reportedly motivated by his father’s death from lung cancer due to his heavy tobacco use. He had a simple concept: To separate nicotine delivery from the carcinogens in cigarettes. Because e-cigarettes do not burn tobacco but simply heat the liquid until it vaporizes, users refer to it as “vaping” rather than “smoking.”

E-cigarettes and other Electronic Nicotine Delivery Systems are unregulated, battery-operated devices that contain cartridges filled with a liquid mixture of propylene glycol, glycerin, flavors, and nicotine extracted from the tobacco plant. Applying heat to the liquid creates vapor that is inhaled as a mist containing some of the flavoring, various levels of nicotine, and trace amounts of carcinogens.

Parents Should Be Concerned: “Nicotine is a possible gateway to subsequent drug use.”

E-cigarettes contain nicotine, a highly addictive chemical that is particularly risky to teens and young adults.

Teenagers’ brains are constantly evolving and changing, making them more vulnerable to addiction. A person’s brain does not fully develop until the age of 25. The younger someone is when first trying nicotine or other addictive chemicals, the more likely that person is to become addicted.

Nicotine can also increase the risk of developing addiction to other drugs and various mental and physical health problems later in life.

Scary Statistics: “Yes, there is valid reason to panic.”

E-cigarettes are now the most popular form of nicotine use among middle and high school students. 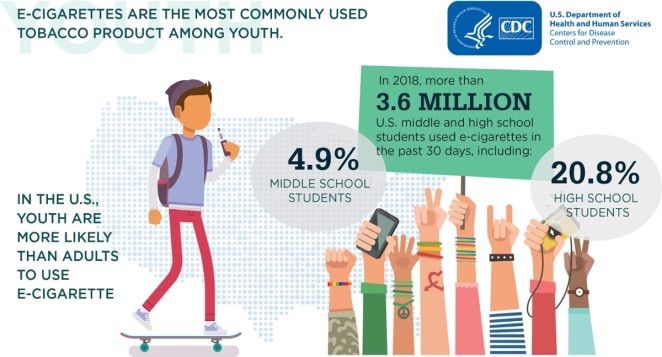 Adolescence is a critical period of brain development during which the areas involved in cognitive functioning is still maturing. Evidence suggests that exposure to nicotine interferes with the normal course of brain maturation and has lasting effects on cognitive abilities, mental health, and personality. The adolescent brain is in a vulnerable state of imbalance and particularly susceptible to the influence of brain altering substances like nicotine.

Nicotine’s Effect on the Brain: “Deadly, regardless of how it is delivered into the body.”

Nicotine is a psychoactive and addictive substance that directly interferes with all brain areas involved in emotional and cognitive processing. 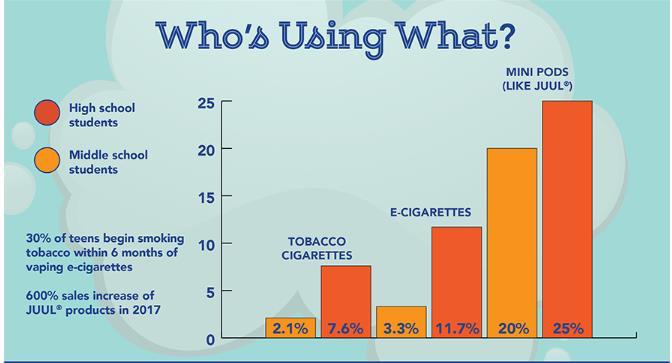 Nicotine use during adolescence results in cell damage and cell loss throughout the brain. The effects of nicotine on critical components of reward pathways and circuits involved in learning, memory, and mood are likely to contribute to increased addiction and long-term behavioral problems in adolescents.

Furthermore, research indicates that nicotine exposure during adolescence increases the risk of developing psychiatric disorders later in life. Compared to adults, adolescent nicotine users experience more episodes of depression and cardiac irregularities, and they are more likely to become quickly and persistently nicotine dependent. As result, adolescents are more vulnerable to nicotine addiction than those who begin smoking as adults. 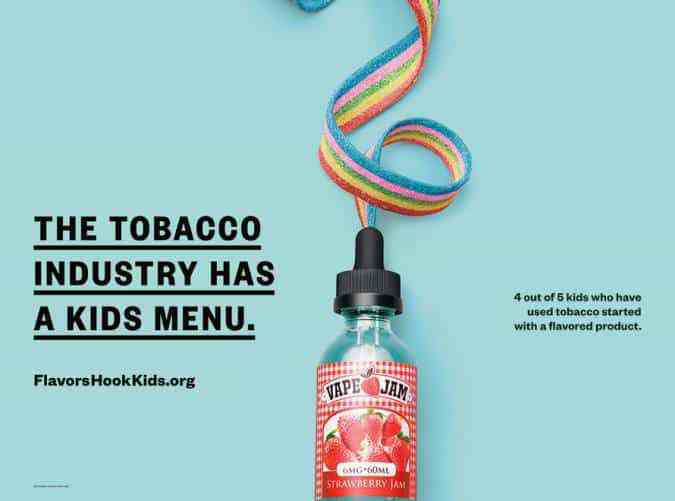 The aerosol from E-cigarettes is not harmless. According to the Center for Disease Control, aerosol can contain harmful chemicals to include:

Tobacco Companies Are Marketing These Products to Children

“What happened to the laws that prohibit companies from marketing traditional cigarettes to young people? Unfortunately, these laws do not apply to e-cigarettes or vaping devices.”

Since 2014, the e-cigarette industry spent $125 million a year to advertise their products and used many of the techniques that made traditional cigarettes such a popular consumer product.

Cigarette companies are prohibited from making television commercials that glamorize smoking, but E-cigarette companies unfortunately can.  According to the Truth Initiative, they are using some creative ways to get to kids including offering scholarships, creating buzz on social media, sponsoring music festivals and events, and introducing appealing flavors.

Behavior Risks: “Is that nicotine or marijuana in their electronic nicotine device?”

What Can Parents Do to Safeguard Against Vaping? 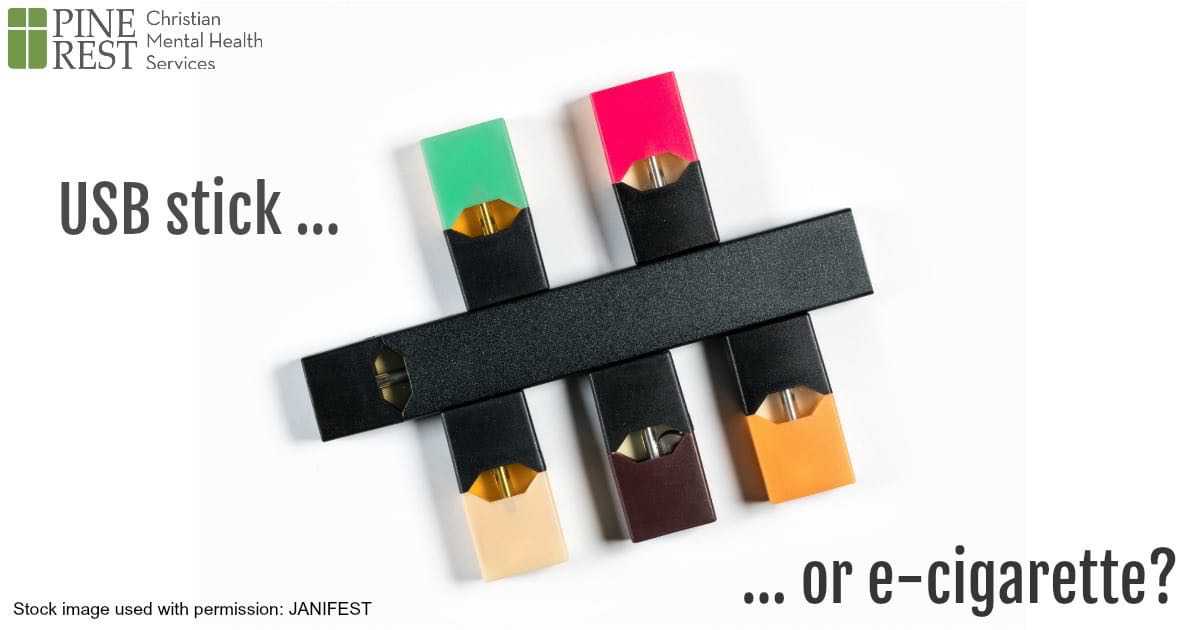 Make yourself familiar with resources that are readily available on-line like the one from the Partnership for Drug-Free Kids.

Look for opportunities to discuss vaping with your children. Try using open-ended questions to get the conversation going such as, “What do you think about vaping?”

Try to understand why.

Ask questions like, “What do you enjoy about vaping?” or “How does vaping make you feel?” Answers to these questions high light your child’s needs that can be addressed in a healthier way.

Share why you do not want your child to use e-cigarettes. If you choose to set consequences, be sure to follow through, while reinforcing healthier choices.

Be a good role model.

Set a positive example by being e-cigarette and tobacco free.

The Bottom Line: “Nicotine leads to addiction, and addiction leads to a brain disease.”

Putting aside the controversy of whether vaping is a win or loss for public health, I think we can all agree that nicotine (the psychoactive addictive chemical found in e-cigarettes and tobacco smoke) inevitably leads to addiction, and that addiction is a brain disease.

How does nicotine cause a brain disease?

Research from the New England Journal of Medicine has concluded that substance use including nicotine causes the following changes in the brain:

E-cigarettes are not safe for anyone, period.

It is never safe for this vulnerable age group to use any nicotine products—whether it’s e-cigarettes or tobacco products. Abstinence is always and will always be the BEST Choice.

Pine Rest’s John Budnick, PA-C has had extensive experience with evidence-based and system-based practice of different aspects of addiction psychiatry including: outpatient substance abuse treatment, inpatient detoxification, medication assisted treatment with buprenorphine and naltrexone, management of patients with dual diagnosis and consult addiction service. His area of expertise is in the diagnosis and medication management of psychiatric and substance use disorders in adults 18 years and older.